Through my contacts and by studying for my book, I came across many old publications, magazines and news letters.

To stop them disappearing through depths of time, I am going to try to scan them all, and have them available, free of charge, for anyone to have access to.

I you see a publication that I have published, and you feel I don’t have the authority to post, please let me know and I will take it down straight away.

This will take many months to complete, and I hope to continually add to it, so keep looking.

Oliver Cock was the pioneer of our sport.

In Particular, Polzeath Rum, from 1952, probably the first ever Surf Kayak film.

The first Surf Kayak World championships in Thurso, Scotland. Taddy Williams made a video of the contest and a big day that wasn’t part of the competition. filmed at Thurso East and the Shit Pipe, Thurso.

This is a one off booklet / Magazine from 1976. This was part to the ‘Canoesport Series’ published by Canoeing Press. 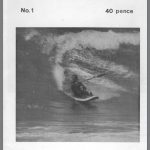 The British publication ‘BeachBreak’ was a magazine published in the 1970’s initially buy a small group of enthusiasts headed up by Vyv Cox.

When I obtained permission to publish these on my website, he gave me this forward:

Here’s a bit of background.

I had a couple of friends who worked in the reports section of my employer. Reports were all published using offset litho and printed in-house. They agreed to take photographs of text and images and make up the plates but the printing had to be done outside. One lunchtime we toured print shops in Ellesmere Port asking only one question: are you union or non-union? On the third attempt we found a non-union man and he agreed to take the plates and print 500 copies. For about the first 8-10 issues I would collect the sheets in packets and take them home for collating. We engaged the Treuddyn (village where I live) Ladies Sewing Circle to collate and staple them on our dining room table for coffee and biscuits and a small donation. Jill and I then enveloped them all, printed the address labels, stuck the stamps on and posted them in the village PO.

After about eight issues the printer collated them and finally he put them in envelopes and sent them out but by that time I had discovered catamaran sailing and decided to move on.

Kevin Andriessen wrote a hand written short history of paddle surf. very interesting read and a help to anyone wanting to know when things happened. this is for waveski and kayak.

This is one of the first Rules books that came out after an accident on Croyde beach. I am not sure of the date.

The BCU Surf Committee sent out a year book every year,

An Introduction to Paddlesurf

BWSA Handbook Maybe around 2004? (its a bigger file, so give it a minute)

An Advert I found in an old book 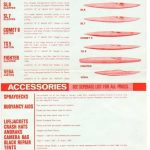 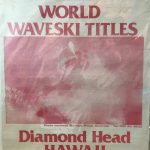